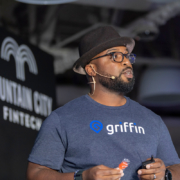 “We need an excuse to rally together and celebrate everything that’s happened over the past few months — especially in the fintech space,” said Pettet, managing director of Fountain City Fintech. “C2FO just had their big funding raise, PayIt is going wild, Fountain City Fintech is in Year 2, H&R Block picked up Wave. Kansas City just has so much freaking momentum.”

The event’s centerpiece remains the second cohort of Fountain City Fintech, which wraps its nbkc bank-based accelerator with the evening of presentations, as well as Kansas City barbecue and libations.

Click here for tickets to the Oct. 15 celebration, which is sponsored by LaunchKC, the Ewing Marion Kauffman Foundation and Cambr.

“The five companies in our Year 2 cohort will have killed themselves for the past 75 days,” said Pettet, eager to show off the hard work of the companies, which came to the accelerator from across the nation. “We’re trying to run the best program that we can, while simultaneously thinking about there being no Techstars this year in Kansas City. The Sprint Accelerator has become less focused on tech with its developing partnership with Dairy Farmers of America. So we’re looking at this event as an outlet to really cheers tech entrepreneurship in Kansas City and all the progress we’ve made.”

“As we’ve really solidified our connections to community members in Kansas City, they’ve gone above and beyond to be helpful and fill the gaps we had in resources from Year 1,” Darnell, the Fountain City Fintech program manager, explained.

Members of the first cohort also worked to legitimize the program and garner vetted quality companies for Year 2, she added.

“All of these companies are super impressive,” Pettet said. “The four that are from outside Kansas City are doing really important work that’s needed in the world, and don’t look anything like the other companies in their space. That’s a very important piece.”

Among the cohort members expected to present at demo day:

“The breadth and the depth of quality in these companies is amazing,” said Pettet, singling out Cupertino, California-based Pluto Money, which last week held the App of the Day spot in the Apple Store and since then has continued ticking up with total users across 1,500 college campuses now in the tens of thousands.

“We intentionally made sure we were taking on diverse viewpoints and interesting niche problems,” Darnell added. “And because of the work we’ve done to build the program, it was easier to select a quality cohort that just so happened to have diversity in gender, age, ethnic groups and backgrounds.”

Pettet called attention to Seattle-based cohort member Nav.It and the work its CEO is doing to change access to the fintech landscape.

“Nav.It is building specific to the female experience in the worlds of fintech and finance,” he said. “So much of the history of finance has been white men building for white men, right? And women have been left behind, as have a lot of socioeconomic, racial and gender groups.”

Click here to read more about the new EIR incubator effort at nbkc.

“So it’s not just a matter of Fountain City Fintech picking up speed,” Pettet said. “We’re now starting net new fintech companies in Kansas City. That’s the goal of this whole thing at the end of the day. That’s why we’re trying to get the flywheel turning.”

“The brand of Henry and that side of entrepreneurship — giving back, caring about your community, taking care of your customers — is something that we really want to carry forward,” said Pettet.

Both leaders of Fountain City Fintech — Pettet and Darnell — graduated from the Bloch School at the University of Missouri-Kansas City, and the accelerator’s “finterns” — Salem Habte and Ali Brandolino — will soon advance from the school the bears Bloch’s name, Pettet said, noting a rich heritage and tie-in with the legendary entrepreneur.

“Henry is a really important part of the narrative of Kansas City and this momentum in fintech,” he said. “None of it happens without him — or people like Ewing Kauffman. But Henry started that first domino, pushing us in the right direction.”