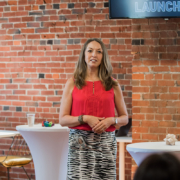 LaunchKC is off to the races toward its fourth annual, national grants competition for tech entrepreneurs.

LaunchKC attracts hundreds of tech entrepreneurs each year – including a 32 percent increase and a near-record 586 applicants this year – to compete for up to $500,000 in grants and an opportunity to build and grow their new businesses in Kansas City.

In its first three competitions, LaunchKC awarded $1.5 million to 29 entrepreneurs. Up to $500,000 is on the line this year, thanks to funding partners like the Missouri Technology Corporation and the City of Kansas City, Missouri.

“More than 1,100 entrepreneurs from around the world applied for grants in those first three competitions,” said Drew Solomon, the senior vice president at the Economic Development Corporation who chairs the grants competition. “The winners have parlayed their grants into 118 full-time jobs with an annual payroll of $7 million, while attracting more than $35 million in cumulative investment, as of year-end 2017.”

Those 20 will advance to the final round of competition at the Techweek Kansas City conference, Oct. 8-12. The annual LaunchKC Pitch Day and awards ceremony is set for Friday, Oct. 12 at Union Station.

“The LaunchKC competition is proving to be a leading edge platform for attracting and developing the best and brightest tech entrepreneurs,” said Mike Hurd, marketing officer for the Downtown Council of Kansas City and LaunchKC. “The proof lies in the performance of each grant recipient, which is tracked quarterly by LaunchKC.”

As of year-end 2017 (following two years of experience with the first LaunchKC class, one year for class two, and one quarter for class three), the following performance metrics were reported:

LaunchKC is a civic engine in the Kansas City tech startup space. It is committed to elevating KC into one of the nation’s top 10 most livable, viable cities for entrepreneurs to be successful and to celebrate the community’s assets.

“We are continually searching for the best and brightest startups or early stage tech businesses to compete for up to $500,000 in grants,” Solomon said. “We want to help these entrepreneurs make their business dreams come true in Kansas City.”