Courtesy of The Startland News

With a July 11 application deadline nearing, LaunchKC past winners emphasized the popular, high-profile grants contest is about much more than chasing a payday. “There’s the community piece. There’s the exposure piece. But once you win — or even once you apply — you’re getting that support system behind you, the connections that you might need,” said Erika Klotz, whose firm PopBookings was among the first LaunchKC success stories in 2015. “It’s a startup essential. We wouldn’t be where we are if we didn’t have some sort of support system, if we were just lone wolfing it. That’s not a good path to take.”

LaunchKC applicants now are vying for eight awards of $50,000 and one $100,000 grand prize that will be doled out after a live pitch competition Oct. 12 at Techweek Kansas City. The program has already awarded $1.5 million to 29 startups over the past three years. Apply here.

Klotz, along with Jeff Rohr, CEO at SquareOffs, and Dominique Davison, CEO at PlanIT Impact, joined Startland’s Bobby Burch this week for a Facebook Live conversation about LaunchKC’s long-term impact on winning startups like theirs.

Most people in the entrepreneur community know about LaunchKC’s prize money and free office space for winners, said Rohr, but many don’t consider the quality of its programming.

“LaunchKC has done a great job of getting experts on various topics. These people really know what they’re talking about,” he said. “It’s good to just break out of the day-to-day and go to a two-hour lunch to pick up a tip or two on something you’re going to encounter.”

And it’s at such gatherings that startups come together, bonded by their early stage challenges and achievements, added Davison.

“Kansas City is really unique in how galvanized our community is around the technology and startup space, and LaunchKC is a critical part of that,” she said.

The program grew out of a recognition to support entrepreneurs, said Drew Solomon, senior vice president of business development at the Economic Development Corporation of Kansas City. The City of Kansas City, Missouri, the area corporate community and the Missouri Technology Corporation all worked together to launch the initiative — not only to give startups a boost but also to flex Kansas City’s growing reputation as an innovative community.

And, remember, the LaunchKC application window for 2018 is open until midnight next Wednesday, July 11. 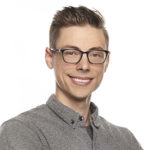 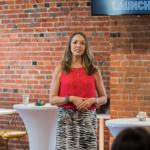